Alexander Gradsky is preparing to release a new record, dubbed "Khrestomatiya". The work is carried out at the own studio of the artist MKTMO and will last at least another month and a half. According to Alexander Gradsky, 12 tracks are recorded, but it is possible that some of them will not be included in the album. Basically, the record will be completely new songs written by Alexander last year. There are no proper names for the compositions of the "Anthology": they will receive names in accordance with musical genres - "Rock", "Waltz", "Foxtrot", "Lullaby", "Tango", etc. "Khrestomatiya" is especially noteworthy in that it The first studio album of the musician after a long break. In recent years Alexander Gradsky has limited himself mainly to the production of live discs.


Information about the "textbook" disk is gradually coming. We are waiting for the release of two discs with different performers of the "Chrestomathy".


Fragment of publication - Alexander Gradsky: "I remember too much!"


- Alexander, is it really true that in 2003 music lovers will hear your new - long-awaited! - disk "Khrestomatiya"?

- I was not in the studio for twelve years. That is, I went there to "clean" the concert recordings, and not to make new ones. All the rest of my CD-ROMs are remakes of what came out on vinyl records. The last original entry "Fruits from the Cemetery" dated the ninety-first year.

- What did the muse leave you for so long?

- And the FIG knows! Laziness ... I built a lot, devoted eleven years to the device of everyday life, began also for the construction of the theater.

- What then turned out to be stronger than laziness and pushed you to a new disk?

- Stupid story. I flew in an airplane to America. I talked to the fellow traveler. It turned out that Irina Volgin - a singer, naturally, Russian-speaking, lives in New York. She asked me to write her some songs - for the money. OK, let's try! I decided to write some simple things so that I could technically handle it. As a result I began to try to write, which I did not do for more than ten years. He started to compose, but simple songs do not compose (smiles). I showed Irina what happened, and she suddenly liked it, but did not embarrass the complexity.

- What kind of music is it, in which style?

- The task was to write music in a variety of ways to show the new singer from different sides. Seven completely different things happened. Something inspired by country music, something - my strange fantasy ... Irina was difficult to cope with all this. For almost a month I had to work with her, so that the girl could all technically sing it.

- So "Khrestomatiya" will be a disk of Volgina, not yours?

- Why? After working with Ira I had the thought: to sing the same things myself.

- But she also bought songs from you!

- We immediately had an arrangement that other singers could also sing them. Including the author. Otherwise, it would be a completely different money, if I sold everything on the vine. I received the minimum amount, which included a recording, an arrangement. I had another five or six ideas of my personal. As a result, her album will have seven of my things plus one other author, where I made the arrangement. And in my disk "Khrestomatiya" there will be twelve or thirteen things. Ira's record will soon be released in New York. My - later. If at first mine came out, I'm afraid its disks might not have sold out, but I want them to be bought because its album deserves it.

- Than Irina Volgin was so shocked by the maestro?

- Nothing. At first she just bought the works ... Ira is a good, pretty girl, a talented person. But most of all I'm grateful to her for making me work.

- None. Ira has a wonderful family, a wonderful husband, a charming daughter. And we just have a very good relationship.


Gradsky plans to conduct a presentation of the Khrestomatiya CD in September 2003, at the STUDIO club, at ul. Tverskaya, 10. Entrance is limited (Only by invitation personally from Gradsky).

GRAD - GORBATOV (On the phone):


"THE DISK WILL ENTER THE PRODUCTION ONLY ON 2 SEPTEMBER, THEREFORE I WILL KNOW ABOUT THE PRESENTATION DATE ONLY SEPTEMBER 2

I QUOTE EXACTLY HIS WORDS ON TELEPHONE TODAY !!!

SO, IMMEDIATELY 2 SEPTEMBER, YOU WILL COMMUNICATE A PRECIOUS DATE

BUT PREPARE FOR THE END OF SEPTEMBER!


Photos of the booklet (cover and part of the liner) to the A. Khradomatiya disk, prepared for release by A.Gradsky! After the official presentation of the author's new work, the site will publish the texts for all 15 songs included in the album. 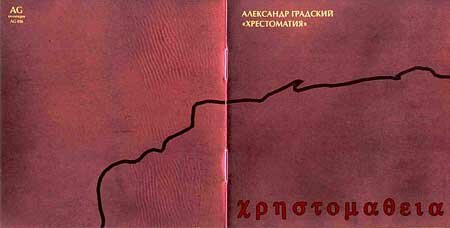 We express our sincere thanks to Alexander Gradsky for the images and lyrics exclusively provided for the site.


SATURDAY AT 9 HOURS 45 MINUTES IN THE MORNING OF THE TVC CHANNEL FROM MOSCOW = DIRECT ETHER WITH GRADIUM !!!


TODAY I CALLED GRADIUM AT 10 EVENTS IN MOSCOW AND ANNOUNCED,

WHAT THE PRESENTATION WILL BE IN THE CLUB "STUDIO", UL. TVERSKAYA HOUSE 10, METRO HUNTING RANGE OR PUSHKINSKY

16TH SEPTEMBER AT TUESDAY AT 16 HOURS